The image is vertically split into two distinguished areas of meaning. The left side with light grey and black colours represent the causes and danger of infectious diseases. On the right, with the pastel rose and brown colours, the control, protect and cure are depicted.

The light grey colour tint contains only a limited proportion of black with its impurity or stain as working meaning. The fatality of an infection through contamination is thereby weakened by the majority of white. The small amount of black densifies the white, as does the fog limiting the view, and works as such inhibitory. It is the atmosphere of a grey cloudy sky, which has a sombre influence, not threatening, but rather boring or irritating. The light grey colour contains a sufficient amount of white to allow its scientific influence to work properly.

On the light grey colour, the culprits that are the cause of infectious diseases are depicted. Therefore, a lot of black is used. The threat must be there, but to a limited extent. This is achieved at the same time by combining the insects, animals, etc. in a (half) monstrous creature, giving the image an imaginative mythical dimension, and presenting the seriousness of the matter as entertainment. 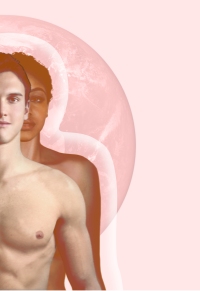 In a medical context, the scientific snow-white colour, has the tendency to become laboratory like. Patients become numbers in a totally white environment, and a human approach is lacking. The red touch makes the white colour less sterile, adding a human, loving aspect. The pink tint awakes feelings of protective care, in the same way as parents care for their kids.

The pink right side shows humans as healthy and protected beings. The naked man and woman hint to the sexually transmitted diseases. The white bow around the figures represents the protection and treatment, such as by a condom, the white suits against contamination, or the cleaning.

The disease versus treatment duality is presented in the overall picture. The half mythical monster on the left hand fits the half human on the right side and forms an ambivalent figure.

With left as the position of the past, and with the reading direction to the right as the future, a positive message is delivered in which the fight against the infections can be won.

The mythical ambivalent creature is laid on the globe, as a source of infections, and for to illustrate the importance of the Tropical Institute of Antwerp and its international reputation.

The icons are derived from KHNUM semantic database.

More about pink and grey in previous blog.

Published by CITY OF 8

View all posts by CITY OF 8